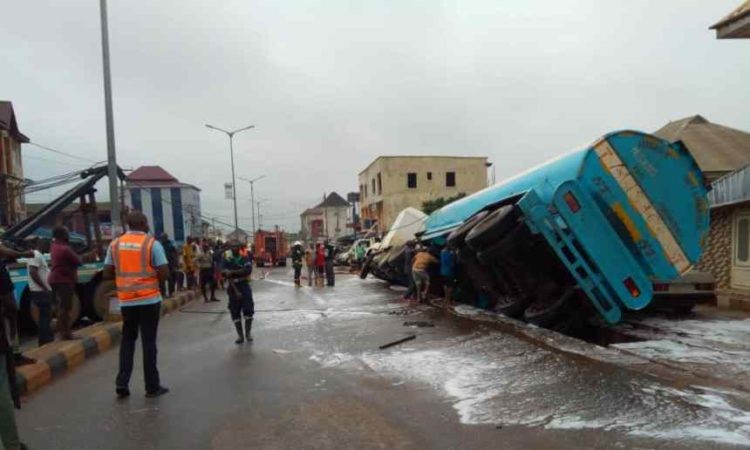 One of the fallen tankers
HomeHAULAGETension in Lagos, Anambra as tankers fall in succession
HAULAGELOGISTICSNEWSTRANSPORTATION

Tension in Lagos, Anambra as tankers fall in succession

'No Death or Injuries Sustained" -LASEMA

There was tension in Lagos and Anambra state on Saturday as three tankers and one containerized truck fell in the two states.

A statement issued on Saturday by the Public Affairs Officer, LASEMA, Nosa Okunbor, which was obtained by Haulage & Logistics Magazine said a tanker loaded with 33,000 liters of PMS fell and spilled its contents at the local airport road in Lagos. Another tanker fell along the Old Abeokuta motor road Agege just as another containerized truck crashed at at Alapere inwards Ketu.

The statement however said no loss of life nor injuries sustained at incident scene of each of the crashes as LASEMA heavy-duty equipment were deployed for quick recovery to prevent secondary incidents.

“In a similar development, as the Airport Road recovery operation was going on,  LASEMA is recovered another fallen oil tanker along the Old Abeokuta motor road Agege. The Agege fallen tanker is laden with 33,000 litter of Automatic Gas Oil, AGO, (Diesel) which fell off its truck head sideways while driving along the Nigeria Postal Service Agege.

“The impact of the fallen tanker resulted in the spillage of its contents. The transloading commenced after carefully identifying the risks involved in order to ensure there’s no loss of lives and valuables in the operation. However, to ensure safety and adequate operational space in compliance with international best practices, the entire incident area has been cordoned off.

“In a related incident, a truck conveying a 40ft fully loaded container involved in an accident at Alapere inwards Ketu is also being recovered by LASEMA. The truck with an unknown registration number lost control on motion as a result of mechanical failure, crossed the other lane due to momentum which made it attempt crossing to other side of the road and getting stuck on the culvert a process resulting in obstruction of free vehicular movement.

“However, no loss of life nor injury sustained at the scene of incident where LASEMA and LASTMA are responders with early arrival of deployed heavy-duty equipment for quick recovery to prevent secondary incidents in the recovery operation.

In a related development, another petrol truck fell in Anambra State on Saturday morning at the state capital, Awka.

Haulage Logistics Magazine gathered that the truck fell into a ditch on Zik’s Avenue, opposite Saint Patrick’s Catholic Cathedral. It was gathered that the tanker spilled its content on the road, a development that caused serious tension and make people to run helter skelter for of another imminent fire.

“The PMS is spilling out and people are scooping the fuel. It is highly advisable you alert residents in the area through your medium to steer clear from the premises in order to prevent any disaster.”

“Fire Service department was equally contacted to be on standby in order to prevent fire incident”, Mohammed said.

It would be recalled that, a truck laden with PMS fell in Onitsha, caught fire and killed at least three persons last month. A woman and her child, caught in the inferno, were burnt to death.The fire also spread into the popular Ochanja market destroying goods and shops worth millions of naira, a development that forced the state government announced a ban on the movement of fuel tankers within the state during the day.