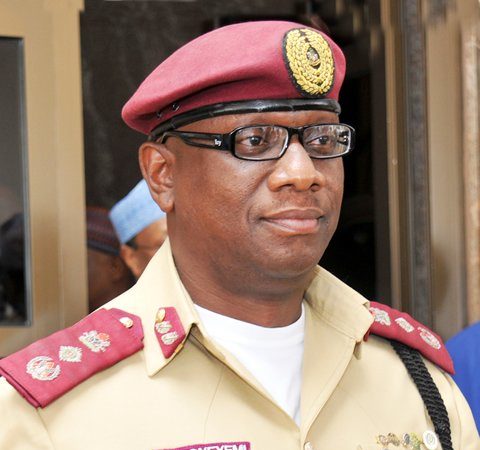 As part of effort to achieve a significant reduction in road traffic crashes in the country, the Federal Road Safety Corps (FRSC) may have launched out the re-enforcement of installation of speed limit device on vehicles.

In a statement issued on Wednesday by the Corps Public Education Officer, Bisi Kazeem, FRSC Issued a strong warning to fleet operators who tamper with the calibrated Speed Limiting Devices in their vehicles for economic benefits or otherwise to desist from such act or risk impoundment of their vehicles and subsequent compulsory re installation and calibration of such speed limiters.

The Corps Marshal, Dr Boboye Oyeyemi in the statement, frowned at the dangerous act and has issued an express directive to the Zonal Commanding Officers, Sector Commanders and Unit Commanders across the country to impound at sight, any vehicle caught in the act.

Boboye also ordered that the driver of such vehicles should be prosecuted and also force re installation and calibration of the devise in the vehicle.

Oyeyemi lamented in the statement that many fleet owners who tamper with the speed limit device in their vehicles engage in such deadly act for economic gains, stressing that they speed beyond the prescribed legal speed limit in other to make more trips within a short time at the detriment of the lives of their passengers and other road users.

The Corps Marshal noted that the perpetrators want to ridicule the achievement recorded by the Corps since the commencement of enforcement on the device, but the Corps will not allow such to prevail as tactical strategies have been put in place to impound such vehicles and make the drivers face the law accordingly.

“I have directed Commanding Officers to impound all vehicles suspected to have altered the device in their vehicles and ensure that such vehicles recalibrate the device before the vehicles are released and we shall be very strict and swift on this”.

While reiterating the reason the Corps introduced the policy some years back, the Corps Marshal was quoted as saying, “The Federal Road Safety Corps as the Lead Government Agency saddled with the responsibility of Road Traffic Management in Nigeria identified speeding as a major contributing factor to road crashes and attendant casualties in the country.

To create a safer motoring environment which is our core vision, Federal Road Safety Commission in line with the resolutions reached with Standard Organisation of Nigeria (SON), Automotive Council of Nigeria, Transport Union Association and other stakeholders commenced the implementation and enforcement on the use of Speed Limiting devices in vehicles starting with commercial vehicles, nationwide”.

The Corps Marshal also stated that the law allows the Corps to carry out such duties when he revealed thus, “The legal frame work backing the Commission’s implementation and enforcement of Speed Limiting Device for all categories of vehicles in Nigeria is stipulated in section 10(3) (m) of the FRSC (Est.) Act, 2007 and section 152(4) of National Road Traffic Regulation, 2012”.

You would recall that the policy came about as a result of the urgent need to put an end to increasing rise in speed related road traffic crashes and the attendant loss of lives and damage to properties that comes with it. Having given the policy deserved publicity; the Corps commenced full enforcement starting with commercial vehicles on 1 October, 2016.

Kazeem called on the motoring public to always tune into the National Traffic Radio 107.1FM to report any suspected case of speeding, obstruction or any emergency noticed on the road for immediate action