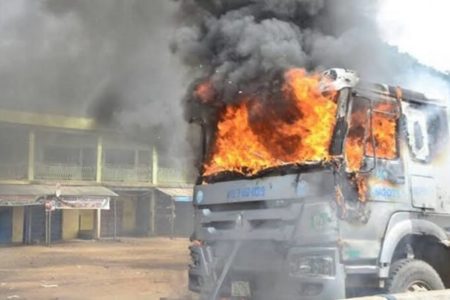 The crash was attributed to break failure and over speeding of the truck.

Dissatisfied by the development, irate mob protesting the incident thereafter set ablaze the Dangote truck suspected to have caused the fatal crash.

“The suspected causes of the crash were speeding and mechanical deficiency suspected to be brake failure. The total number of people killed  were  07  made up of 02Male dults , 03Female Adults, 01Male Child and  01Female  Child , The number injured were : 10 (4Male Aduklts and  6Female Adults) The Injured victims were rescued  to Ota General Hospital, while the  corpses of the dead  victims were deposited at the  IFO General Hospital Morgue in Ogun State.

Meanwhile, the FRSC Sector Commander, Ogun State Command Clement Oladele has tagged the scene of the crash as a black spot, notorious for frequent crashes which has claimed over 40 lives in the last five years.

Oladele called on motorists, especially articulated vehicles to drive cautiously whenever using that section of the corridor.

The Sector Commander also advised passersby to desist from turning into mobs and resorting to self-help by wilfully destroying public properties or accidented vehicles, irrespective of the level of provocations, saying there are standard ways of reporting and handling grievances to appropriate law enforcement agencies.