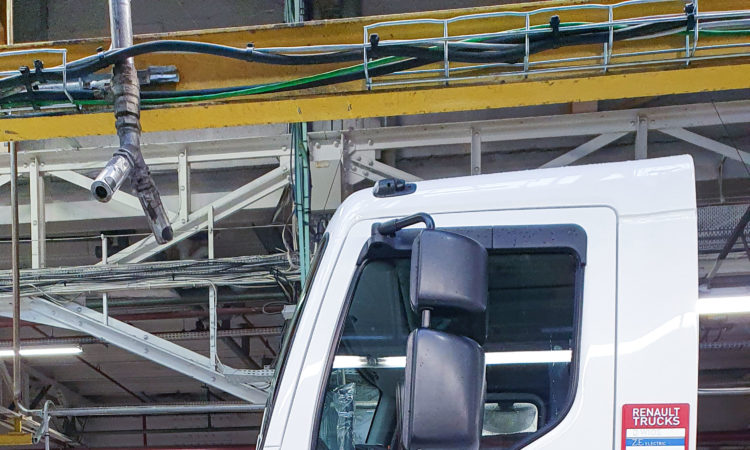 Renault have started serial production of its electric trucks. The production starts in March.

The company has also predicted that electric vehicles will represent 10% of its sales volume by 2025.

This was disclosed in a press release issued by the company on Tuesday March 10 and obtained by Haulage & Logistics Magazine.

The press release reads in parts: “Electric trucks are now a reality for Renault Trucks, from both a commercial and industrial standpoint. Various facilities have been installed in the Blainville-sur-Orne industrial site to manufacture the electric models. Located next to the truck assembly line for the distribution range, the 1800 m² Z.E. building is now entirely dedicated to technical operations relating to electric vehicles.

“Technical procedures are performed upstream and downstream of the Renault Trucks D and D Wide Z.E. passing through the assembly line. This building is also used to store components; in particular a temperature-controlled area is dedicated to battery storage.

“Manufacture starts one week prior to the electric trucks passing through the assembly line, with preliminary operations performed within the Z.E. building. Skilled technicians assemble various subassemblies specific to all-electric vehicles (drive, engine, gearbox, modular power box, etc.). They are then transported to the assembly line in order to be mounted onto the vehicle.

“In March 2020, the company is due to begin serial production of its D and D Wide Z.E. electric trucks in its Blainville-sur-Orne plant. The factory, which has been operating since 1957, specialises in the production of medium-duty vehicles and truck cabins. Every day 240 cabins are made and 72 distribution trucks are assembled.

“The Renault Trucks D and D Wide Z.E. are assembled on the same line as the equivalent diesel models. At the end of the assembly line, the electric trucks are returned to the Z.E. building for the technicians to carry out additional technical operations and quality tests. In total, 50 hours of work is required to manufacture an electric truck. Renault Trucks predicts that electric vehicles will represent 10% of its sales volume by 2025”, the release reads.