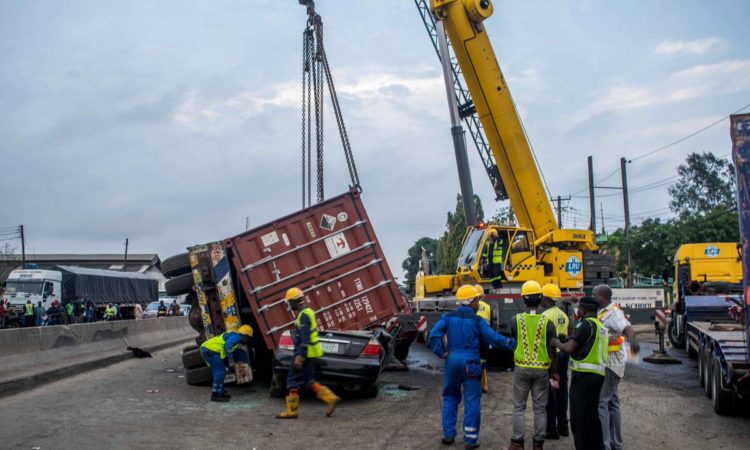 The last weekend was not a desirable one for many stakeholders in the trucking sector as multiple trucks involved in various degrees of crashes amidst lockdown.

On Saturday 2nd May, two trucks carrying containers fell at Mile 2, owing to bad road and the other one as a result of poor maintenance.

Haulage & Logistics magazine gathered that one of the trucks conveying a 40feet container loaded to capacity with breakable items at LACASERA Bus Stop ‘inward’ Mile 2 and the other one conveying two 20feet containers headed ‘outward’ mile2.

No lives was however lost to the accident and no injury recorded.

According to a press release issued by the Head, Public Affairs-LASEMA, Nosa Okunbor and obtained by Haulage & Logistics Magazine, the two trucks involved in lone accidents attributed to bad state of the roads, lack of adequate maintenance of trucks involved by operators/owners and carelessness on the part of drivers.

“No loss of lives, nor injuries recorded at the scene of the incident. Upon arrival of the Agency’s heavy duty equipment, the truck owner claimed that the accident truck was fully loaded with brakeable items and as such they transloaded their goods into another truck”.

“The container was recovered off road, with the Agency’s fucklift to a layby, so that full vehicular activities could resume.

“In a second operation by LASEMA Response Team the same location as the first, this time round involving a truck conveying cargoes of two 20feet containers headed ‘outward’ of mile 2. At the scene of incident, it was discovered that a truck conveying two 20feet container with unknown registration number, suddenly lost control and fell due to bad road, thereby obstructing vehicular activities along the axis.

“There was no loss of life, nor injuries. The Accident truck was recovered off the road with use of the Agency’s heavy duty equipment, the forklift (Goliath)”.

Earlier on Saturday, LASEMA had recovered the Wreckage of a burnt truck from 3rd Mainland Bridge, Lagos.

Haulage & Logistics Magazine gathered that the truck bursted into flame, a development that was suspected to be as a result of electrical sparks from the engine.

The burnt truck with registration number XN 561 AKD, it was gathered, was laden with several bundles/packs of cardboard papers and other combustible materials before it went on flame near Adeniji Adele junction, inward Obalende. However, no lives were lost and no injuries recorded.

Meanwhile, one person was killed and about 15 people injured on Friday May 1st after a  petrol tanker burst into flames also at Obalende area of Lagos State.

The tanker belonging to the NNPC was said to have tipped over before bursting into flames in front of the Oando filling station.

According to the General Manager, Lagos State Emergency Management Agency, Dr Olufemi Oke-Osanyintolu, who confirmed the development, the 45,000-litre capacity tanker loaded with petrol caught fire after fallen on its side in from of the filling station.

Osanyintolu in his remark said “unfortunately, the inferno has resulted in a single fatality, 15 minor casualties, and one major casualty, who happens to be a Lagos State Firefighter. He has been subsequently transferred to the Lagos State General Hospital for treatment while the minor casualties received on the scene medical attention,” he said.

In its statement, NNPC “expressed appreciation to the good-spirited people of Lagos around the scene of the incident and fire service personnel who brought the fire under control.”