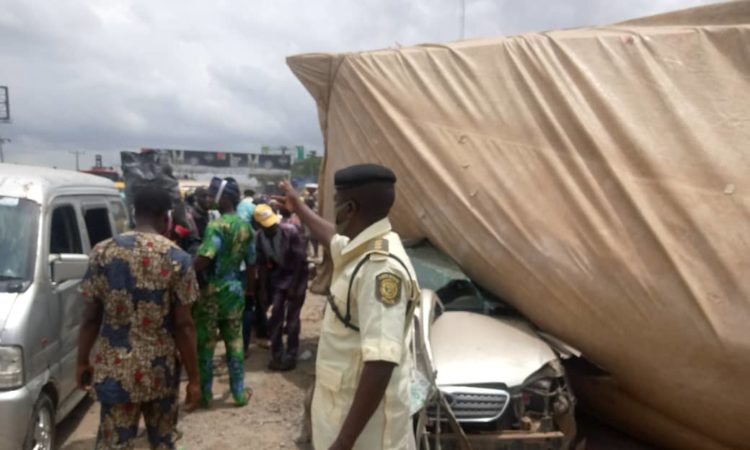 Tragedy struck on Friday afternoon at the boundary between Lagos and Ogun State as a heavily loaded truck belonging to Dangote Group rammed on other vehicles and motorcyles, killing two people and injured another seven in the process .

According to Ogun State Traffic Compliance and Enforcement Corps (TRACE), Otta Division, the Dangote group truck with registration number GN 6712-16 Ash was coming from Sango inbound Lagos. TRACE added that the accident happened at about 12:04 PM on Friday at Tollgate.

TRACE said in its situation report that nine people were involved in the crash, comprising of six male and three female. The agency added that two people died (one male and one female) and seven Injured (two female and five male).

According to agency and eye witness at the scene of the accident, the truck had Brake failure and, rammed into the vehicles and motorcycles on the road. “TRACE operatives and other sister agencies collectively rescued the situation, took all the injured to Ota state hospital while the presumed dead taken to Ifo mortuary”, TRACE said.

The Lagos and Ogun tollgate has witnessed several crashes over the years. In February, 2020, the Federal Road Safety Corps (FRSC) Sector Commander, Ogun State Command, Clement Oladele tagged Lagos and Ogun tollgate as a black spot, notorious for frequent crashes which has claimed over 40 lives in the last five years. Oladele called on motorists, especially articulated vehicles to drive cautiously whenever they are using that section of the corridor.