One dies, seven injured as tanker, other vehicles crash at Otedola Bridge 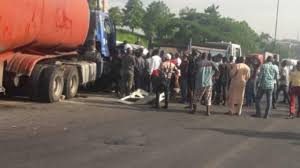 One person was confirmed dead and seven others injured on Thursday in an accident that occurred on Otedola Bridge, Lagos State.

According to Lagos State Traffic Management Authority (LASTMA), the accident happened around 8:00 AM on Thursday.

LASTMA said in its official twitter handle that the accident involved a fuel tanker, a car and a commercial bus loaded with 10 passengers.

“Fatal accident on Otedola Bridge inward Berger involving a tanker and a Mazda bus. All relevant emergency agencies alerted. Preliminary reports confirm that a Golf car was also involved in the crash. No casualties from the car.

“One passenger from the bus confirmed dead with seven others injured.”