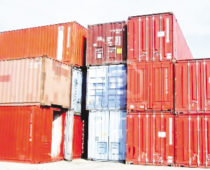 The President of Nigerian Institute of Shipping (NIS), Capt. Anthony Onoharigho has called on the Nigerian Ports Authority (NPA) and the Nigerian Shippers Council (NSC) to auction the empty containers littering Nigerian ports, so as to de-congest the ports.

The NIS boss noted that the issued of empty container littering the Lagos port is causing nuisance and may lead to unmanageable port congestion in the nearest future.

While speaking in Lagos during the week, Onoharigho noted that most of the vessels calling at Nigerian ports with import containers do not leave the port with corresponding number of empty containers they have discharged. He therefore called on the government to invoke laws that would force shipping companies to pick up their empty containers from the port.

He said “these containers are meant for individuals who are shippers. The vessels that bring them, come in with goods and are supposed to take them back with goods. But if there are no goods to carry, the containers should be removed from the ports immediately so, as not to constitute a nuisance.

“NPA has a constitutional way of handling cargo with the understanding, arrangement and agreement between them and port terminal operators.They can also invoke that part of the law to discharge the containers from the port,” the NIS boss said.

Speaking further Onoharigho said “this issue of the empty container has been on for a long time and the shippers’ council and the NPA are responsible for goods and containers’ transit from one place to another.There is a stacking place in Apapa and if individual ship owners who export cargoes want to get a stacking place of their own, they can do that in Apapa”.