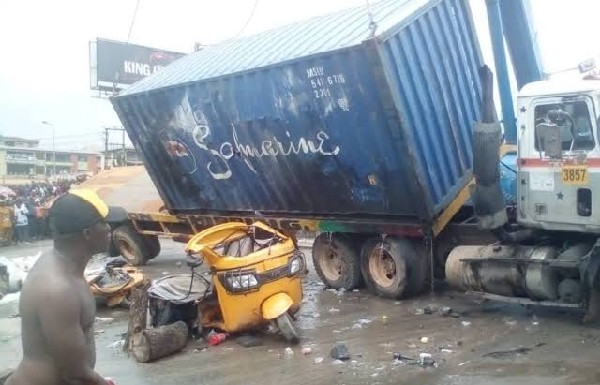 As part of effort to stop the menace of fallen trucks and road crashes in Lagos and Ogun State, the Federal Road Safety Corps (FRSC) RS 2 Command, Lagos, has concluded plan to commence a Special Operation tagged “Operation Scorpion II ” on unlatched containers on trucks between Aug. 10 and Aug. 16.

This was disclosed by the Zonal Commanding Officer in charge of both states, Assistant Corps Marshal Imoh Etuk, in a statement issued on Thursday through the Zonal Public Education Officer in Lagos, Ijeoma Ajuzie.

Etuk said in the statement that the operation was aimed at tackling the menace of road traffic crashes caused by unlatched containers on trucks and trailers. Some of the traffic offences in focus, according to the ACM include, driving without valid driver’s licence, expired or worn-out tyres, dangerous driving, driving under the influence of alcohol and drugs and speed limit violations.

The ACM however urged Haulage and logistic companies to ensure that their drivers are well trained and that the vehicles were in good condition to avoid undue waste of lives and property.

Part of the statement reads “With regard to Regulation 151 of the National Road Traffic Regulations (NRTR 2012), articulated vehicles carrying containers should be properly latched.

“Thus we demand that all vehicles carrying containers and/or goods must be adequately secured/latched,” he said.