HomeHAULAGE“Apapa gridlock is a blessing to some people”, agent alleged
HAULAGELOGISTICSNEWSTRANSPORTATION

“Apapa gridlock is a blessing to some people”, agent alleged 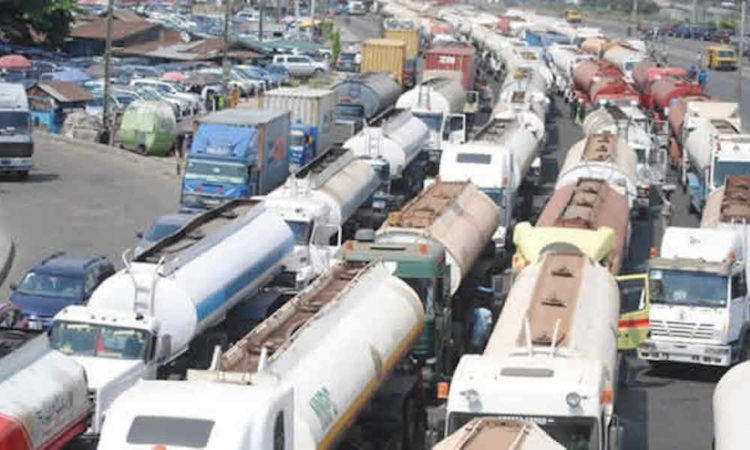 It is no longer news that the notorious gridlock in Apapa has wrecked and still wrecking a lot of havoc to businesses and human life, it is however dishearten to hear that some people are benefiting from the anomaly.

A clearing agent at Apapa and founder of Worldwide United Forum for Igbo Patroit & Aborigines (WUFIPA), Mr. Edwin Chukwudire-Obi recently narrated in an online interview with Haulage & Logistics Magazine how some people are befitting from the Apapa gridlock.

He said “the Apapa gridlock is a blessing to some people as they are making huge amount of money every day. Right from Mile 2 bridge, Ijora bridge, Mobil road, Area B axis and other entry points to Apapa main port and first and second gate of Tincan and PTML, one could see officers and several security operatives making merchandise of truck drivers and other utility vehicles, collecting different amounts of money ranging from #5,000, #10,000, #20,000 etc, depending on the lane you want to join.

“In some cases, truck drivers who want to go on one way to the port to drop their empty containers could be asked to pay as much as #150,000 to the security operatives. The gridlock has killed transferring of containers to bonded terminals. While it cost #60-80,000 to transfer containers to bonded terminals, now it cost as much as #400,000 to do same. In all, the presence of tank farms located within the vicinity of the port have helped to make Apapa gridlock the nightmare of port users.

“ Although the road from second gate to mile 2 is being constructed at a snail’s speed by a construction company known as  Hitech, it’s believed that if the construction was not abandoned in the usual Nigerian custom of abandoning projects, port users are hopeful that the Apapa gridlock would be ameliorated in the nearest future. I say ameliorated because there is no assurance that after the construction of the road, Dangote and BUA trucks will not take half of the road as their permanent parking lot at the detriment of other port users”, Obi said.

According to Obi, the gridlock has affected the business life of everyone making a living in Apapa whether port workers or non-port workers, but the worst hit are the agents and their importers, because they lose more resources more than others.

“If these containers were not returned after 21 days or 14 free days given by the various shipping companies, depending on which shipping company that owns the containers and the terms they gave, the importers will forfeit these deposits and even incur additional payment on the empty containers until it’s returned to the offloading bar at the Port.

“Because of the gridlock, trucks would load containers inside the port and it could take up to three or four days to come out of NPA gate and head to the already congested express road. On the way to the warehouse, the truck may likely spend additional two to three days before getting to the warehouse, and after offloading the cargo, the truck could spend clear three or four weeks on the line before it could enter the port to offload the container.

“With this time wasted returning the container, definitely, the deposit will erase and additional charges incurred. Many freight forwarders have lost huge sums of deposit money which would’ve served as their profits after delivering an importers goods. Within these three to four weeks on the line to offload the empty containers, truck drivers and their conductors go through gruesome period. They eat, bath and defacate on the expressway leading to the port. That’s why every road leading to Nigeria seaport is smelling”, Obi said.

While lamenting the hardship the gridlock is causing to port users, Obi said “both Custom officers, NPA staffs, relevant government agencies, agents and members of maritime workers union who own cars, cannot drive to the port with their cars because every entrance and exit point is blocked with trucks carrying empty containers trying to return the empties to the discharge point in the port or trucks loaded with containers going outside the port after completing the clearing formalities.

“The situation is made more complicated and worst by loaded or unloaded utility vehicles belonging to Dangote and Bua companies which litter every available space allover Apapa, thereby making vehicular movement of goods and services a herclean task.

“We all know that the process of clearing goods in the port is not done in one place, but because of Apapa gridlock, many freight forwarders spend valuable working hours trekking from one place in Apapa to another, a situation made worst by the banning of motorcyclists and tricycles within Apapa environs by Lagos State government.

“To ameliorate the difficulties of coming to work at Apapa and going back, many freight forwarders and other port users out of necessity board boats plying the water ways leading to Badagry, Agbara, Iyana Oba, Ojo etc. Unfortunately, many passengers of these small boats have lost their life in boat mishaps because these boats are built with ordinary wood, not covered and if rain is falling, it falls on the passengers. The boats has no lights, and are driven with small touch lights in the night when most people are returning back to work and board the boats to avoid the heavy gridlock at Apapa- Oshodi and mile 2 axis.

“Some of the boys driving these makeshift boats are not trained, and some consume excessive hard drugs and alcohol before driving these boats. Between March 2019 till date, more than eighteen freight forwarders and other port users have lost their lives in this boat mishaps”, Obi recounted.