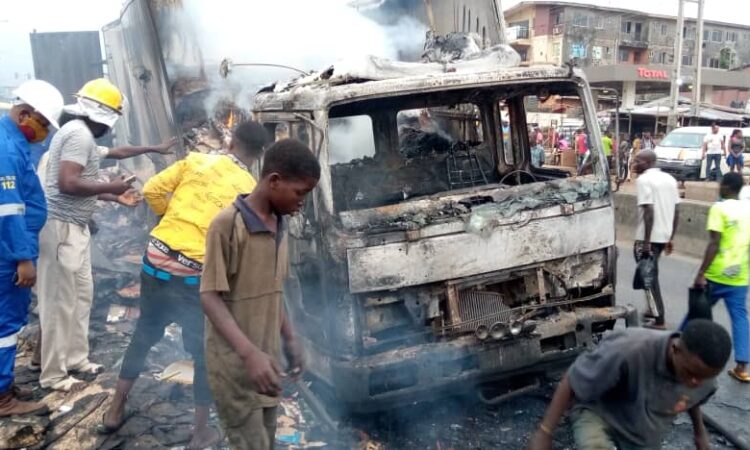 The Lagos Emergency Management Agency (LASEMA) on Friday recovered a fallen containerized truck at Iyana-Isolo as well as a burnt truck at Ikorodu areas of Lagos.

According to the Director General/CEO of the agency, Dr. Olufemi Oke-Osanyintolu on Friday in his verified twitter handle, the agency’s Recovered Response Team, Lion Squad at Agbowa, Ikorodu, recovered a truck that was engulfed with fire at Ikorodu Roundabout inward Sabo Roundabout.

The LASEMA DG added that the Agency’s Eagle Squad responded to a fallen containerized truck with registration number BDG 635 XM carrying a fully loaded 40Ft Container which fell off the road at iyana Isolo and evacuated it from the road.

No lives was however lost in the crashes.

“It was discovered upon arrival at the scene that a truck with an unknown registration number laden with empty cartons was gutted by fire. Further investigation by the LRT revealed that the major cause of the inferno was as a result of electrical spark from one of the engine cables.

“However, no loss of lives nor injuries sustained at the incident scene. LRT, Officials of the Lagos State Fire (Odogunyan Station), Nigeria Police Force, Shagamu (road divison), FRSC were the responders who jointly put out the fire and recovered the carcases of the burnt truck off the road with the aid of a private tow-truck.

“Similarly, the Agency’s Eagle Squad at Cappa Oshodi, effectively and efficiently responded to a fallen containerized truck with registration number BDG 635 XM carrying a fully loaded 40Ft Container which fell off the road while trying to navigate through a bend at Iyana-Isolo under bridge, inward Mile 2. However, no casualties recorded at the scene. LRT, LASTMA and Nigerian Police Force, Ilasa Division were all responders at the scene while the Agency’s heavy-duty equipment, Forklift, recovered the truck off the road”, the LASEMA boss said.