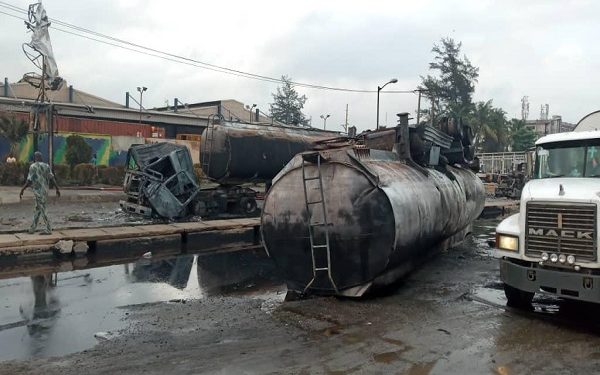 The need to be safety conscious was brought to the fore again at the weekend following a disastrous occurrence at Mile 2 metropolis of Lagos State, where a tanker exploded at Mile-2 Oke, on the Oshodi-Apapa expressway.

Haulage & Logistics Magazine gathered that the explosion occurred around 1:00 a.m. when the tanker, said to have been loaded with PMS products from a nearby tank farm, upturned while trying to navigate a bad portion of the road.

It was gathered that the tanker went up in flames as soon as it fell and eventually spread through the trail of the spilled PMS to the other parts of the road.

According to eye witnesses, not less than 10 vehicles got burnt, but the Lagos State Emergency Management Agency (LASENA) stated that three vehicles, including a truck loaded with lacasera products got burnt.

According to the director general of LASEMA, Dr. Oke Osanyintolu, the Agency received distress calls concerning the crash which occurred around 0100hrs and activated its emergency response plan.

“On arrival, it was discovered that a fuel tanker loaded with PMS overturned and burst into flames due to the oil spillage. This, in turn affected stationary trailers parked inwards Apapa. A combined team, comprising of @LAG FireService and the Agency responders extinguished the fire”, LAESEMA said.

The LASEMA boss however confirmed that no life was lost, adding that two tankers and a truck got burnt.

The Mile 2 tanker crash has furthered re-established the need for all truckers across the country to take caution on the road, especially tanker drivers.

Many people have however slammed the Nigeria government for its inability to fix the roads across across the country, even as they condemned the unscrupulous attitude of many truck drivers on the Nigeria roads.

A trucker, Ahmed Kabiru wondered why the government has not been able to fix the roads in the country despite the huge revenue the country is generating everyday.

aA truck driver, Lanre Akinwumi attributed the dilapidated state of the roads in the country to the high spate of corruption among the Nigeria government official as the reason the roads have not been fixed.