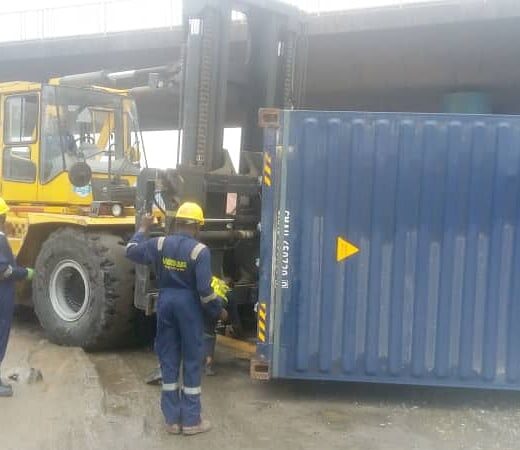 Another crash occurred on Sunday at Ojuelegba Bridge as a container fell off a truck and landed on a moving vehicle inward stadium road, Ojuelegba in Lagos.

The Federal Road Safety Corps confirmed that four occupants in the vehicle were trapped but were later recued alive.

The Lagos State Emergency Management Agency (LASEMA) said the trailer developed a mechanical fault and fell on a Toyota Camry with registration number KRD-822FX. The passengers were trapped until they were rescued by the agency around 6:35 p.m., on Sunday.

The Director-General of LASEMA, Olufemi Oke-Osanyintolu, confirmed that the four persons trapped in the vehicle were evacuated by the agency.

Reacting to the incident, the Federal Road Safety Corps Sector Commander in Lagos, Olusegun Ogungbemide, warned owners of articulated vehicles that are not maintaining minimum safety standards to keep such vehicles off the road for the sake of innocent motoring public or face the wrath of the law.

Mr. Ogungbemide said that the crash would have been more devastating if not that the container was properly twist locked.

He commended all the rescue agencies for their swift response that assisted in rescuing all the trapped victims alive.

He advised all motoring public to be more careful especially as we enter the peak of the end of year activities.

Accidents at the Ojuelegba Bridge have become a recurring concern. Containers not properly latched onto trucks continue to fall off the delicate bridge, often landing on unfortunate vehicles under bridge.