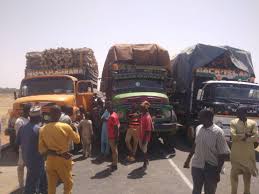 Vehicular movements and other economic activities were brought to a standstill for several hours on Friday as protesters block the Gwaram-Basirka road in Jigawa state.

Their anger was the continued closure of the popular Gwaram Bridge linking the Jigawa end to the nearby Northeastern states of Bauchi, Gombe up to Adamawa and Taraba.
The state government had in August last year announced the closure of the bridge to articulated vehicles as part of the measures to effect repairs on the damaged portion of the bridge.
The protesters, mostly youths, blocked the road thereby preventing the movement of vehicles from both sides. Consequently, travellers going to Bauchi and Gombe states from Kano and Jigawa axis were made to spend several hours on the road.
As a result, travellers were forced to disembark and trek by foot to the other end to continue their journeys
What reportedly triggered the protest was the erection of the iron barrier on the bridge to prevent articulated vehicles plying the road from crossing the bridge.
According to one of the protesters, Baban Fati, a driver, at the scene of the protest, their action was to draw the attention of the government to the need to provide them with an alternative route close to the bridge. He said, as a result of the restriction imposed on the bridges, fuel scarcity had been aggravated in the area while the prices of foodstuffs and other materials have increased astronomically.
Speaking on the issue, the state government confirmed the closure of Gwaram Bridge for major repairs, urging motorists to use other alternative roads.
The state’s Commissioner of Works and Transport, Aminu Usman Gumel, while speaking to newsmen in Dutse through the Permanent Secretary of the ministry, Datti Ahmad, said the two bridges were damaged by flooding last year and after engineering assessment, the state government has now resolved to close the bridges for work.
He explained, however, that light trucks and busses could pass on the bridges but heavy trucks are restricted for now to avoid total collapse and also for motorists’ safety before the commencement of the work.
The commissioner also advised motorists to use alternative roads for their movements and that of their goods and services