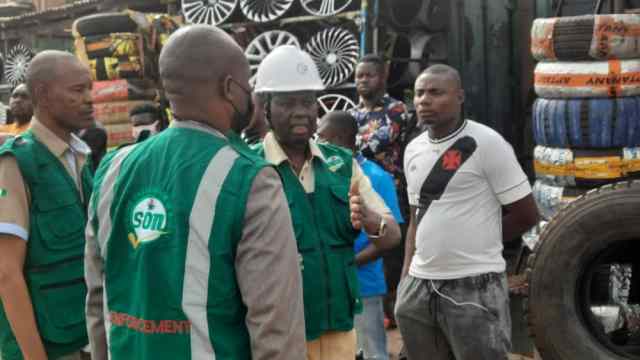 About 30 shops containing suspected substandard and compromised new tyres were sealed by enforcement officers of the Standards Organisation of Nigeria (SON) with the support of the Security Joint Task Force penultimate Tuesday at the Apo Tyre Market, Abuja.
The operation was carried out in the early hours of Tuesday as the traders were settling down to the business of the day amidst subdued protests and pleadings with the leaders of the SON and the Security Teams.
Addressing the media after the exercise, the leader of the SON team, Dauda Yakubu, explained that the action was predicated on detailed information on the prevalence of supposedly new but already compromised tyres in the market.‪
Yakubu disclosed that SON’s previous effort to remove the suspected substandard tyres from circulation in November 2021 ahead of the yuletide celebrations was violently resisted by the traders.
He said this necessitated SON’s request to the Security Joint Task Force to protect Nigerian consumers from the imminent dangers from the continuous circulation and sales of the suspected substandard tyres. ‪
‪The SON director admonished motorists and consumers, in general, to pay closer attention to tyres before purchase by looking out for rough edges as signs of forceful stuffing and unstuffing.
‪He explained that the owners of the seized products and sealed shops would be given a fair hearing as provided in the organisation’s Standard Operating Procedure, while the SON management would subject the matter to due legal process as usual.