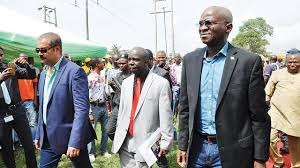 Speaking in Abuja when he received the “Ember” months review activities for 2021, Fashola stated that during the period, commencing from September to December , the ministry intervened in 225 major locations, covering 14 transport axes around the country.

He pointed out that the feedback from the interventions, especially from the Federal Road Safety Commission (FRSC,) was that it reduced turnaround travel time on Nigerian roads.The minister added that from the reports, accident rate reduced by a significant percentage compared to the corresponding period, meaning that fewer lives and properties were lost during the period.

He explained that the feedback will aid the ministry to do more, stressing that recommendations from the various agencies will be taken advantage of, to improve on project delivery in the coming years.

“Let me challenge all our contractors that the standards that apply in their countries must not be compromised in Nigeria. The standards that we have here under the Federal Highways Act and the subsidiary regulations made under it, must be reiterated to them and they must comply.

“For any non-compliance, contractors should be immediately sanctioned in accordance, not only with the terms of the contract, but in accordance with the law. When there are shortcoming we must know,” he noted.

Fashola stated that the ministry was preparing for the rainy season, noting that by the end of month, it would have available a contingent plan for the season.

He urged the FRSC to assist in locating areas where vegetation may pose a problem to road users so that trimming could take place before they cause major issues around the country.

He urged petroleum tanker drivers and other road users to desist from abusing the roads, urging them to follow the rules and regulations pertaining to road usage, including parking along major road shoulders.

Fashola urged Nigerians to be patient as the problematic roads were being fixed nationwide, stressing that road users have a duty to protect the roads.

He noted that the Eko bridge will be fixed soon without necessarily closing it down, as emergency works had already been carried out to prevent accidents, with the budget for the actual work having just been approved.

The minister assured that the infrastructure will not be allowed to further deteriorate, noting that any diversion will only affect heavy duty vehicles.

Also , the Director of Highways, Construction and Rehabilitation, Mr Folorunso Esan, had taken the audience through a pictorial view of major roads fixed during the ember months.