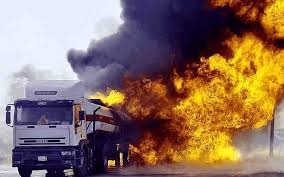 There was pandemonium at Idi-Oro, in the Mushin area of Lagos State, on yesterday, when a tanker loaded with Premium Motor Spirit (petrol) exploded at a Mobil Filling Station in the community.

The fire was said to have spread to an adjoining three-storey building, burning down the property.

It was gathered that the fire started around 1pm when the tanker, laden with 33,000 litres of petrol, was discharging its content at the filling station on Agege Motor Road.

The fire also destroyed properties worth millions of naira and rendered many occupants of the building homeless.

Some residents tried in vain to salvage their property while firefighters battled the inferno.

A tenant, Sowemimo Oluwaseyi, blamed the filling station for the incident.

He said, “I was at work when my brother called me that fire from Mobil gutted our house. The filling station does a lot of things that we don’t like. We complained to the former DPO at the Alakara Police Station and he said things would be done properly, but this new DPO does not care.

This particular tanker that caused this fire today (Wednesday) has been there since yesterday. What was it doing there? It ought to have discharged its content and leave the premises. We have been complaining about this act for more than five years, but nobody did anything.

“We were unable to salvage anything. The clothes on me now are what I have left; even my mum, who is a caterer, her property is in the building and we could not salvage anything. All her plates, coolers, burners, everything is gone. Where do we start from?

“I recently bought some appliances because I was planning to move out of this place. But now, everything is gone. Even all my credentials are gone.”

The filling station was cordoned off by the Lagos State Safety Commission.

The management of the Mobil Filling Station, in a statement on Wednesday, said it was investigating the cause of the incident, adding that measures would be put in place to forestall a recurrence.

The statement read, “11 Plc management (operator of Mobil Service Station) would like to bring to the attention of the general public that there was a fire incident at one of our retail service stations (filling station) at Idi-Oro, Mushin, this afternoon during the product discharge operation.

Thankfully, with the help of the Lagos State Fire Service, our in-house fire team and other operators’ fire logistics, the fire has been properly contained. We are now entering the phase of investigating the cause of the incident as well as taking stock to ascertain the level of damage and to put corrective processes in place to forestall any future recurrence.”

The Director of the Lagos State Fire Service, Mrs Margaret Adeseye, in a statement, said the agency got a call to the incident around 1.17pm.

She explained that the agency mobilised other responders in combating the inferno.

“Preliminary investigation revealed that it was a 33,000 tanker that was fully laden with Premium Motor Spirit, otherwise known as petrol, that was on fire.

“Although the cause of the disaster was yet to be ascertained, officials of the Lagos State Fire and Rescue Service remain on top of the situation and would provide necessary updates as situation demands,” she added.

He said, “Nobody died in the incident; the driver sustained some injuries. He had third-degree burns treated by LASAMBUS at the scene of the incident.”

The Director-General of LASEMA, Femi Oke-Osanyintolu, confirmed that there was no casualty.