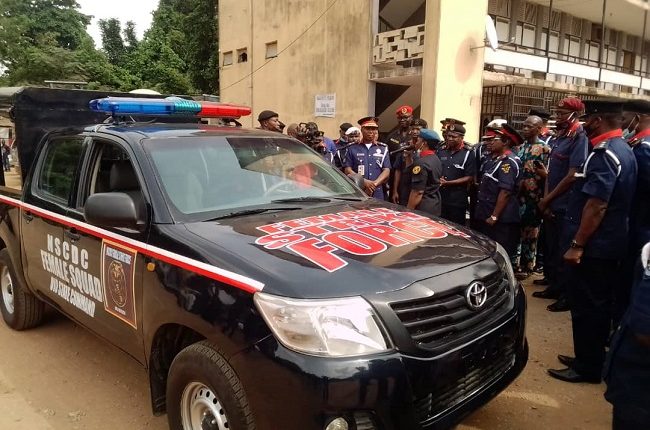 An operational vehicle for the Female Special Squad (FSS) of the Nigeria Security and Civil Defence Corps (NSCDC), Oyo State Command, was on Monday presented by the state Commandant, Michael Adaralewa, to be used in the safe school initiative of the Commandant General, Ahmed Abubakar Audi.

Making the presentation to the Commander of the squad, Deputy Superintendent of Corps, Adesewa Ibrahim, at the Command Headquarters in Ibadan, Adaralewa made it known that the vehicle was donated by the national chairman of Petroleum Tankers Drivers (PTD),  Salmon Oladiti in support of the vision of the FSS.

According to the Public Relations Officer, Deputy Superintendent of Corps Oyindamola Okuneye, in a statement, the Commandant enjoined well-meaning indigenes and residents of the state to emulate the good gesture of the donor by supporting security agencies for enhanced protection of lives and property.
Commending the state government for its support for the NSCDC, Adaralewa asked for more to be done by the government for optimal performance.

He admonished the leader of the female armed squad to make good use of the operational vehicle for the benefit and protection of good people of the state.