Truckers Decry 50 Percent Drop In Cargoes Coming Into The Country 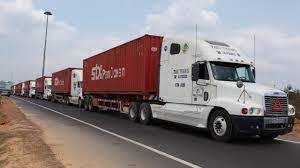 Truckers in Nigeria’s transport sector have expressed worry over looming rise in unemployment in the country.
They also decried 50 per cent drop in cargoes coming into the country, further sparking fears of unemployment in the sector.
The group also lamented a 60 per cent reduction in haulage fares, leading to job insecurity in the sector.
Disclosing this during an interview, the Chairman, dry cargo section, Nigerian Association of Road Transport Owners (NARTO), Abdullahi Inuwa, said the effects of the Covid-19 pandemic were still affecting the sector till date.
Inuwa, who blamed lack of empty containers in Europe for shipment of cargos and high exchange rate as reasons for the drop in cargoes, said “activities in the Ports are low, and there is drop in importation.
.”The global challenge of Covid-19 has affected everything globally. You can even understand now that even in Europe, there is scarcity of empty containers to carry cargoes. Apart from that, you know that high cost of exchange rate has also affected importation, he said.
He also blamed government policies made through their agencies, such as the Nigeria Customs Service (NCS), as part of what is affecting importation.
The NARTO boss said apart from the Federal Government, the next biggest employer of labour is the transport sector, noting that a lot of people would be out of job due to drop in cargoes.
“On the transport sector, transportation is a very big chain of movement because next to the Federal Government in terms of employment is the transportation sector.
“When you say there is drop in importation and there is no cargo, at least the importation has dropped by more than 50 per cent for cargoes.
“So, as you know, it has thrown a whole lot of people out of job because it is when there are cargoes that there will be jobs.
“I cannot quantify how much we are losing, but what I know is that a single truck feeds about 20 people, aside the owner.
“So, when there are no cargoes, you can imagine the number of persons that will not be able to feed”, he said.
Inuwa explained further that “when they tell you that there is over 50 per cent drop in cargo, you know that it will affect a whole lot of people. One thing you are supposed to understand is that Lagos State is a centre where all the activities happen.
“I do not have the statistics of how many trucks that are out of work now, but from our own assumption, it is difficult for agents to get trucks to carry their cargoes.
“Now, more than 50 trucks rush for just one terminal delivery order brought by an agent. This has crashed the fares of trucks from N350, 000 to N400, 000 it used to be before now to N180, 000 that it is now,” he said.