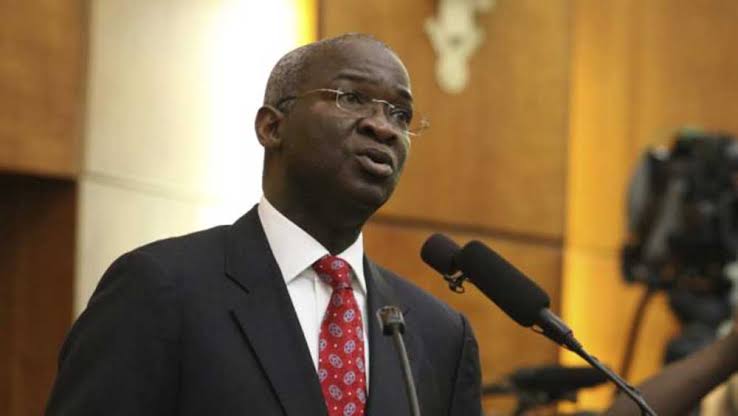 The Minister of Works and Housing, Babatunde Fashola, on Monday appealed for stakeholders’ understanding over the discomfort they would experience during rehabilitation works on some bridges in Lagos State.
Fashola made the appeal at a stakeholders meeting on comprehensive repair of Eko and Apongbon Bridges on Monday.
The meeting was held at Ijora-Olopa in Lagos.
Stakeholders in attendance included representatives of Association of Maritime Truck Owners, transport companies, Apapa Local Government officials and traffic regulatory agencies.

Top officials of the Federal Ministry of Works, Permanent Secretaries of the Lagos State Ministries of Environment, Transportation and Office of Infrastructure alongside their Directors were also present.

Fashola, at the interactive session, said that several portions of Eko Bridge became worn out due to years of neglect, hence the ongoing interventions.
The minister said that the Federal Government was tackling the problem holistically and needed support of stakeholders for smooth operations.
He said: “The ministries and Local Government need to help us create awareness for people to know that we all have roles to play during rehabilitation works.
“We (Federal Government) know the problem, we know the solution, we have a plan, but we need your support.”
The Minister appealed to representatives of the truck operators to encourage their members to build truck parks.
He urged them not to always resort to”subtle threats or blackmail” each time issues of their excesses constituting public nuisance were pointed out.
Fashola said that the colossal damage to Apongbon Bridge was being addressed by the contractors on the project.
The Managing Director, Buildwell Plants and Equipment Industries Limited, George Mhanna, gave a breakdown of the schedule for rehabilitation works on Eko and Apongbon bridges.
He said that the rehabilitation would be done in categories, prioritising the worst sections.
Earlier, making slide presentations, Oluropo Oyetade, Director, Highways, Bridges and Design, said 20 bearings had been changed on the 4.1km Eko Bridge.
The bridge, which links Lagos Mainland with the Island, has 12 ramps.
Oyetade said: “We have 1,732 bridges nationwide, from which Lagos has 105 and fourth in ranking, after Taraba Niger and Cross River.

Out of 105 bridges, we have intervened in 23, with 10 completed, 11 ongoing  and two new contracts in 2022 budget. The new ones are Carter Bridge and Iganmu.”
He said that the first phase of emergency repair of Eko Bridge was carried out in June 2020, during which another set of defects were noticed.
This, according to him, led to another contract award for Phase II in September 2020.
Oyetade said: “Again, more defects showed up and Honourable Minister now directed for a holistic review of the whole bridge.
“These took all Directors of Highways months to accomplish and culminated in award of Comprehensive Maintenance of Eko Bridge in February 2022.”
The Permanent Secretary, Lagos State Ministry of Transportation, Olowoshago Kamal, represented Governor Babajide Sanwo-Olu at the event.
He promised collaboration for speedy completion of the rehabilitation works.
The Chairperson of Apapa Local Government, Idowu Senbanjo, said that traders of a popular fish market and truck operators were insisting on remaining under the bridges and on roads.
Senbanjo said this was because of promises they claimed government made to them,  expressing concern on how to evict them.
The News Agency of Nigeria reports that Fashola had earlier gone round to see the situation under some bridges in Lagos Island.
These include Eko, Apongbon, Obalende and Third Mainland bridges, where he sensitised traders, artisans and other encroachers on dangers of their operations.
He extended the evacuation ultimatum to the encroachers under the bridges till June 19, 2022, appealing that they comply voluntarily to avert use of force.