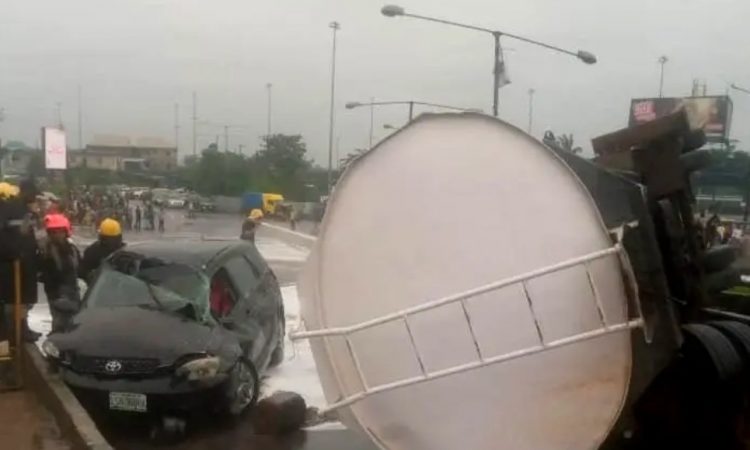 What would have resulted in a major fire outbreak was, on Tuesday, averted in Costain, Lagos, after a fuel-laden tanker fell while ascending a bridge.

The incident occurred at about 2p.m., causing the tanker spill its contents. However, it was promptly attended to by emergency responders.

The tanker was ascending the Costain Bridge inward Iponri, Funsho Williams Avenue, Surulere, when it fell. It was said to have hit a car, then tumbled and spilled its contents. But nobody was injured during the incident

Adeseye said men of the fire service were on ground mitigating the situation, assuring public safety and counting on public support to do away with combustible materials within the vicinity.
Giving updates on the incident, the Permanent Secretary said: “Upon arrival at the scene, LRT found a fallen tanker laden with 33,000 litres of PMS.

“Investigations revealed that the tanker, while ascending the bridge rolled back, hit a car then tumbled and spilled its contents.
“The LRT, alongside LASTMA, Police, state and federal fire and were joint responders on ground.

“The fire fighters are blanketing the spilled contents, while adequate safety measures have been put in place to avoid ignition of fire.”
As at 4.45p.m., he said: “Trans-loading of the product into another tanker is ongoing.
“Members of the public are to avoid the area and refrain from scooping of product.
“Residents should avoid lighting any naked flame until the situation has been fully contained.”